Why Your “Easy Come, Easy Go” or “Drill Sergeant” Parenting Style Might Not Work! 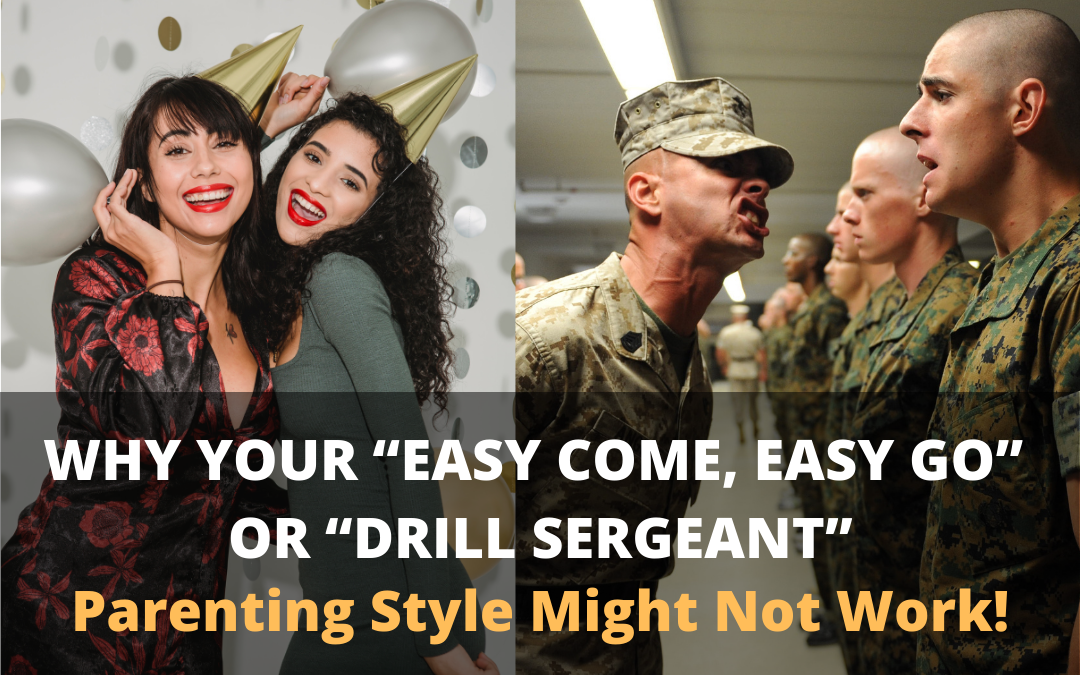 When I was growing up my parents were definitely not “easy come, easy go” ones. My mother was (and still is), a woman that liked a routine. If it was interrupted, look out!! Even to this day, she doesn’t cope well with change. Every Saturday we would be made to clean our rooms. This included dusting the furniture, and folding and tidying our clothes in our drawers! As I got older, this routine became very frustrating to me, as all I wanted to do as a teenager, was play netball, then go hang out with my friends. But no! Mum always made sure the routine was enforced!

Now your mum may have been completely different from mine. One of my friend’s mum was the total opposite! On a Saturday Penny was allowed to do whatever she felt like doing. Even if it was sleeping in until midday! Gosh did I envy her, as I loved sleeping in, and still do! However Penny’s life tended to be rather hectic, and she used to complain about it to me at school. You see, she was a girl that really didn’t like change that much, and at home, her life was constantly changing.

Penny’s mum was a single parent bringing up three kids, working two jobs and dating at the same time. Penny said that she often felt like the parent to her mum! She went on to share with me that her life felt like one big problem that she was always trying to solve.

Norman Vincent Peale, well known for his positive thinking, once said, “The only people who do not have problems reside in cemeteries”. Isn’t this so true and I think it’s somewhat comforting! Everyone has problems, difficulties and obstacles to overcome in life. It is what shapes our Character.

Looking back on my childhood I see that all the experiences I had growing up have molded me into the person I am today. Before I was introduced to the DISC Behavioral Model, the needs, fears and emotions of my personality were unknown to me. I knew that I had this thing called a personality but I had no way of relating to it. As a teenager, I would often look in the mirror and ask myself, “Who am I?” I had an identity crisis that I didn’t know how to deal with.

You see, your personality style is shaped and driven by your beliefs. And your beliefs are the decisions and judgements that make up perceptions you hold as truths.  Your belief system is essential because we live in a world filled with sensory information. All these sights, sounds, feelings, and tastes bombarded us at any given moment. Our creator had to give us a way to filter out what would otherwise be overwhelming or unnecessary. Your belief system focuses on whatever it determines to be relevant to your life experience. And it also shapes your personality.

You might think that too-permissive parents, such as Penny’s mum, are the ones whose kids have no rules, no curfews, no dress code, and no manners. True, but they’re not the only ones. You may be surprised that some of your habits could put you into the “pushover” or permissive parent category, according to experts, even if you think that you’re doing everything right with your tweens and teens. “Many parents today misunderstand their role,” says parenting expert Leonard Sax, MD, PhD, a family doctor in Chester County, PA, and author of Girls on the Edge and Boys Adrift. “They often see their role as making sure the son or daughter gets into a top college or protecting them from disappointment. Depending on which DISC Behavioral  Style you are will depend on how you treat and react to your kids.

In the DISC Behavioral Model the:

Many parents think they are there, to provide a safety net in situations where it might be wiser to let kids experience the consequences. Especially the S and I Style parents. Here are two common situations parents often find themselves in. You might like to think about whether you are any of these two DISC styles and about how you can change your ways:

When being a drill sergeant doesn’t work

Are you an authoritarian parent? When we are observing you with your kids we might think of boot camp, with you as the drill sergeant. A drill sergeant insists on unquestioning obedience. He punishes autonomy. His purpose is to “break” the will, so he can reshape people according to an absolute standard. He’s in control at all times!

He’s not a warm, fuzzy kind of guy, and he’s not going to inspire feelings of intimacy. But when his system works, he can boast about one thing: His recruits tend to obey.

For instance, parents are MORE likely to be identified as authoritarian if they strongly AGREE with statements like:

If you can relate to this style of parenting and you are a D Style, how about becoming an authoritative parent instead. And have a commitment to developing and practicing a little empathy for understanding your child’s experience. Here’s a couple of tips:

The authoritative parenting style is an approach to child-rearing that combines warmth, sensitivity, and the setting of limits. Parents use positive reinforcement and reasoning to guide children. They avoid resorting to threats or punishments. Kids raised by authoritative parents are more likely to become independent, self-reliant, socially accepted, academically successful, and well-behaved.

No routines or limits and trying to be a friend

Some parents such as the I Style are more concerned with their teenagers liking them than being effective authority figures. They tend to create a peer to peer relationship with them. I often say, “A friend can’t tell another friend: ‘You’re not allowed to do this,’ but sometimes a parent needs to say that to a 14 or 15-year-old.” Often in the house there are no daily routines or limits, as these style types can be disorganised and routines irritate them.  Generally most children thrive when their environment is stable and predictable. Here’s a couple of tips if you are an I Style parent:

Sax says. “Some moms don’t feel they have any authority at all.” Teens need authoritative parents to help them make the right choices, not friends to gossip with, Sax says. “If you’re ready to change your relationship with your teen, you need to own that and make a big change. Sit down with your son or daughter and say, ‘I haven’t been doing this right,” Also remember to stay consistent with this change. Some days it might feel easier to give in because you’ve had an exhausting day. However, I’ve learned from experience that this causes more harm than good to the relationship.

You might remember that I mentioned earlier, there are four DISC Styles. I’ve only mentioned two, the D and the I Styles here, so check back for Part 2 and I’ll introduce you to the S and C Styles and why avoiding conflict and being too critical might not work as a parent. If you have found any of the tips here helpful please share my Blog with other parents that you know. And I also have a Parenting Facebook group you might like to join here:

If you would like to learn more about the Four DISC Styles, or how to effectively deal with conflict check out our courses at PeopleSmart Academy here:

Online Courses for Developing Your People-literacy

I’ve already started to think about my next Blog. A mother asked me this question on one of my online calls, so I thought you might like to hear my answer in the form of a Blog. She asked, “Sandra, how do you create a family culture rooted in co-operation and teamwork?” Mm?? Good question, isn’t it. Look out for my next Blog to learn how.